The year 2018 is approaching the end, and here is a brief summary report. 2018 has been a busy year, with many interesting activities and achievements. As we get more experience and feedback, the Centre is gradually finding its course, both with respect to its research and innovation goals.

The research in all work packages has had good progress. CIRFA is on schedule when it comes to number of peer-reviewed journal publications compared to what was promised in the original proposal, and the team is very actively contributing to international scientific workshops and conferences. To highlight some WP-achievements: WP1 has proposed a new approach for wind retrieval from SAR (Nilsen et al. 2018, submitted), WP2 has developed a flexible scheme for sea ice classification, which can be used to multiple modes of SAR data, ranging from single-frequency single-polarization data to multi-frequency fully-polarimetric measurements (e.g. Lohse et al, 2018, Singh, et al., 2018, Doulgeris and Cristea, 2018). WP3 has made progress on oil spill characterization and drift modelling, and several new papers are on the way. WP4 has conducted field campaigns, developed and tested new RPAS technologies. WP5 has developed a high-resolution ensemble prediction system (EPS) for coupled ocean-sea ice tested with ensemble Kalman Filter data assimilation (Fritzner et al., 2018), and implemented the functionality for utilizing EPS forcing in the open source drift model used for operational decision support. A new validation method for fjord ice classification was tested in a field experiment at Kongsfjorden (Negrel et al., 2018) by WP6. For detailed information, have a look at: https://cirfa.uit.no/publications/.

There has also been significant progress in WP7 in testing CIRFA algorithms in operational work-flows. We are operationally testing a sea ice segmentation algorithm at the Norwegian Ice Service by running ice type segmentation on incoming Sentinel 1 SAR images, with the aim to evaluate and test the performance. Similarly, Norut’s algorithms to retrieve wind and wave information from SAR are continuously ran at KSAT, and the outputs are integrated into KSAT’s deliverables to customers.

We also see more interactions between work packages in developing integrated remote sensing products. Examples are the collaborations between WP5 and WP1, WP2, and WP3.

The CIRFA-team got three new members in 2018; Lise (hired as new administrative coordinator), Andrea (hired in a tenure track position), and Vebjørn (hired as new engineer in WP7). Two of CIRFA’s associate PhD students (Temesgen and Jakob) graduated, and they were immediately employed in new positions at Norut. CIRFA announced three new PhD positions in 2018, and two of these, aimed at research in multi-modal computing and scalable computing, will hopefully be in work by February 2019. The third, planned for research on detection and modelling of polar lows, has already been re-announced.

In 2019, CIRFA will have the first graduations of Centre-funded PhDs. This year’s Young Scientist Forum was focused on “Innovation and IPR”. It was organized in collaboration with Norinnova, UiT’s Technological Transfer Office. In 2018, CIRFA has had dialog meetings with all of its active partners. These meetings have been very informative, both ways we hope, in the sense that scientists from CIRFA were allowed to meet discuss directly with key personnel at users about their specific needs.

In response to a request from some of our user partners, CIRFA organized a thematic workshop focused around Sea Ice RS at Gardermoen in September 2018. This gathered researchers and representatives from user partners with special interests in these topics. The event also allowed for direct interactions on issues related to specific sea ice information needs.

The CIRFA conference was also this year organized at Sommarøy Arctic Hotel in middle of October, with good participation from all partners. The program was influenced by the upcoming midway evaluation, which occupied our attention the last months of 2018. Hopefully, all partners were able to present their opinion about the CIRFA’s activities and achievements in a way that gives perspective for collaborations towards the end of 2023.

We wish all our partners and collaborators a Merry Christmas and a Happy New Year. We look forward to a fruitful collaboration in CIRFA in 2019. 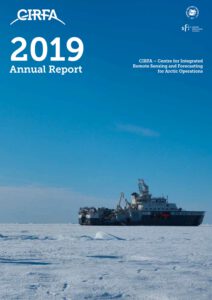